Bridge 2022: Shaping the Fight against Human Trafficking Together

The theme for the Conference – “Shaping Tomorrow Together” was chosen in acknowledgment of how the world has changed in the last few years. Through Covid, the Ukrainian war and all the uncertainty at present, the world has become a different place from how we envisioned it to be. Therefore EFN chose this theme to emphasise the need to be on the leading edge of how the network collaborates to make effective change. Shaping Tomorrow Together also served as a reminder that as a network it has to be intentional in shaping its actions with the times, being proactive instead of reactive to face the challenges ahead.

The theme and agenda lined up for the Conference conveyed that it has a prominent role to play in the future of fighting anti-human trafficking and doing it together as a network is the best way forward. Sheldon Armitage, EFN’s Network Services Director said “Change can’t come from a single source or partner…hence the desire to highlight the efforts and projects EFN members are doing. The power of our network demonstrated that despite the uncertainty, the network was flourishing and we developed many ways for us to work together.”

Leanne Rhodes, the Executive Director of The European Freedom Network also shared her vision for Bridge saying “EFN had its first Bridge conference in 2012 and we have been doing them ever since. We named it Bridge conference because we know that no one organisation can provide everything that is needed to see a survivor heal from the trauma of being trafficked, find employment again and live their best life. It takes a network, and we as EFN, provide a Bridge that they can walk across to find what they need. This year’s highlight was to be together in person after two years of conferences online. Our members connected and networked with each other, with many reporting that they found the help and support they were looking for.”

Highlighting the need for collaboration, Shawn Kohl from The International Justice Ministry (IJM) spoke on the importance of working with the police. In his talk he noted that our role as NGOs is to help the police understand that the assistance provided to the police force can help their case and support victims to testify strongly and boldly. NGOs must understand that the police often do not know how to handle this crime other than to treat it within the legal framework and its due process. He added that they are not trained regularly on trauma-informed care and therefore NGOs need to be diligent in using the tools social contracts allow to end this impunity and stop the perpetrators. 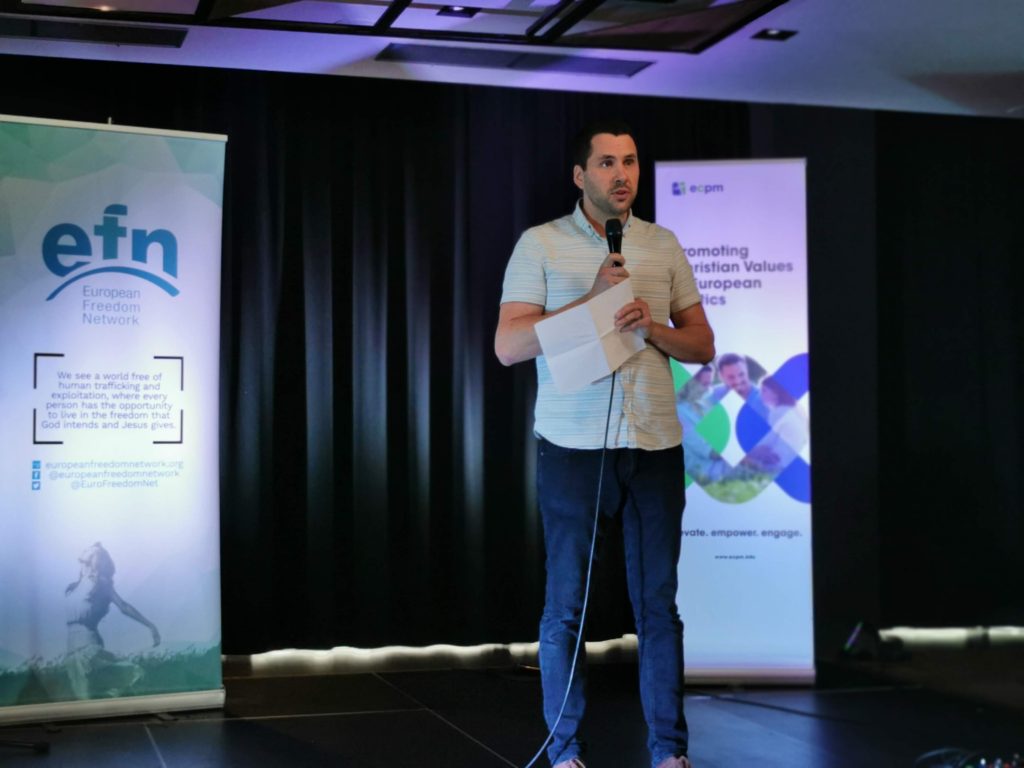 Bryan Carrey leading the session on Sustaining peace-building efforts and the importance of inward self-care.

Speaker, Bryan Carey, spoke on sustaining the efforts of peace-building and bringing shalom to the work that we do. As the Director of International Partnerships, Peace Catalyst International, a Christian peace-building organisation based in Sarajevo, Carey works and facilitates interfaith dialogue by highlighting the voices of survivors of the Bosnian civil war in the 1990s.

Carey spoke on what it looks like to be a shalom builder as a missionary, church and everyday Christian drawing parallels between the Bosnian war and genocide and the current war in Ukraine. He also talked about how the network could use a peace-building framework that centers around the theme of truth, justice, mercy and peace. Explaining further he said those components are imperative not only for the restoration of the downtrodden but also for inward care and sustenance in the midst of great pain and trauma. 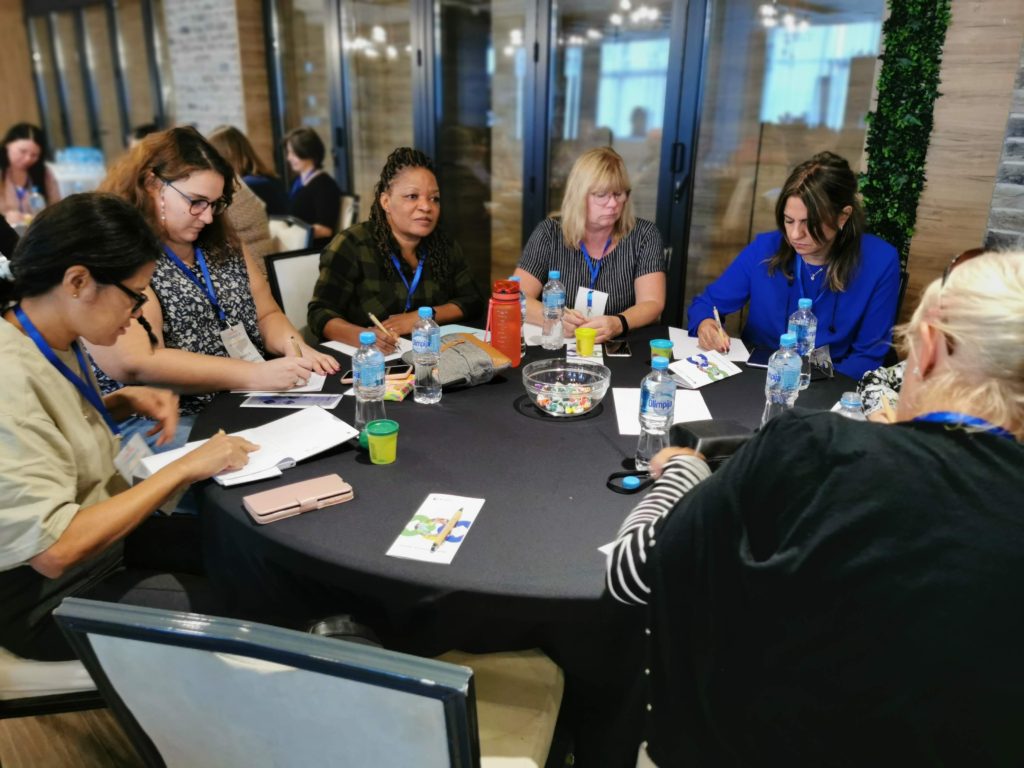 Participants are seen doing an exercise on the National Referral Mechanism lead by Dr. Leah Edwards.

EFN’s operations team member Dr. Leah Edwards led a discussion on the National Referral Mechanism and its importance. By harnessing the power of its collective members at Bridge, EFN aimed to understand its members’ experiences with the national referral mechanisms in their country and what is needed to support the creation of one. A national referral mechanism is a system within a country that identifies and refers survivors of trafficking to support services ranging from safe shelter, immigration support and legal aid. While the EU commission strongly advocates for all EU member states to have a functioning NRM, there is significant improvement needed in most member countries to reach this goal. Throughout the network, there are diverse intersections and experiences with NRMs and governments’ responses to supporting survivors. At Bridge the research project utilised a survey to capture EFN members’ experiences within their country. 19 surveys were collected representing 16 countries. Following Bridge, interviews will be conducted to provide further information and a report will be released for the EFN community to use in their advocacy work. 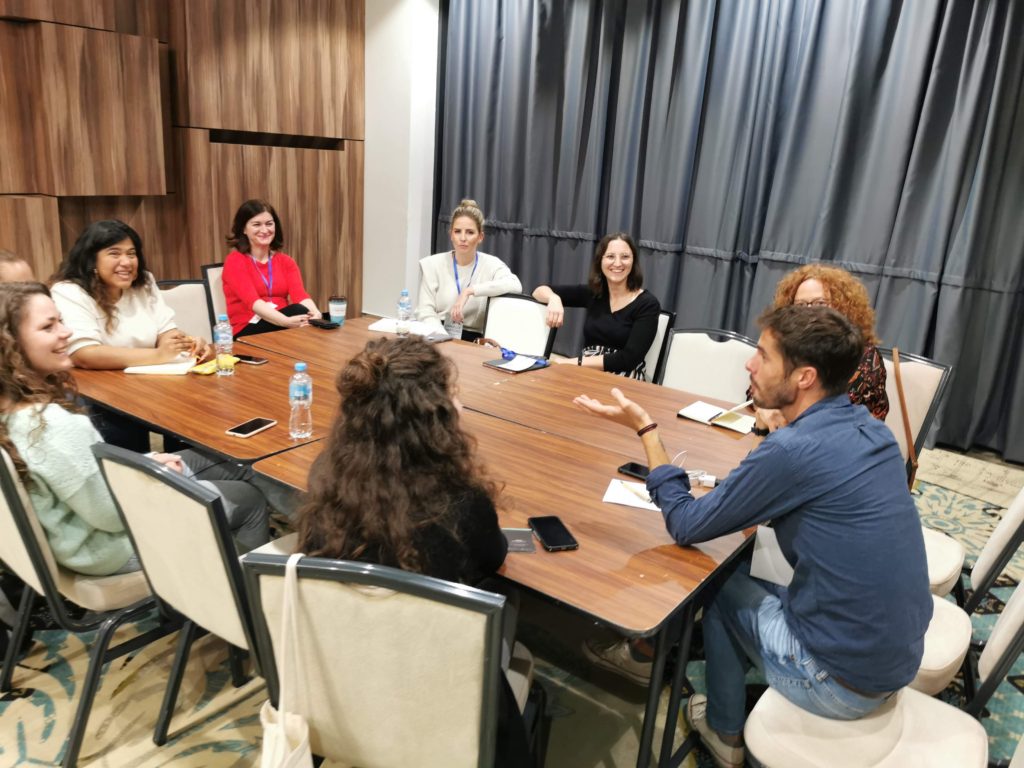 Attendees in discuss the challenges this sector faces at one of the Open Space sessions.

This year the Bridge planning committee decided to do things a little differently by having Open Space sessions run concurrently on various topics like leadership, building a pool of expertise in Europe and running safe houses. The objective of the Open Spaces was to gather the different groups of interests and expertise within the network and create an opportunity for members to connect, discuss and learn from one another. Members expressed that it was a great format to work with for upcoming Bridge conferences and should expand on the topics discussed. 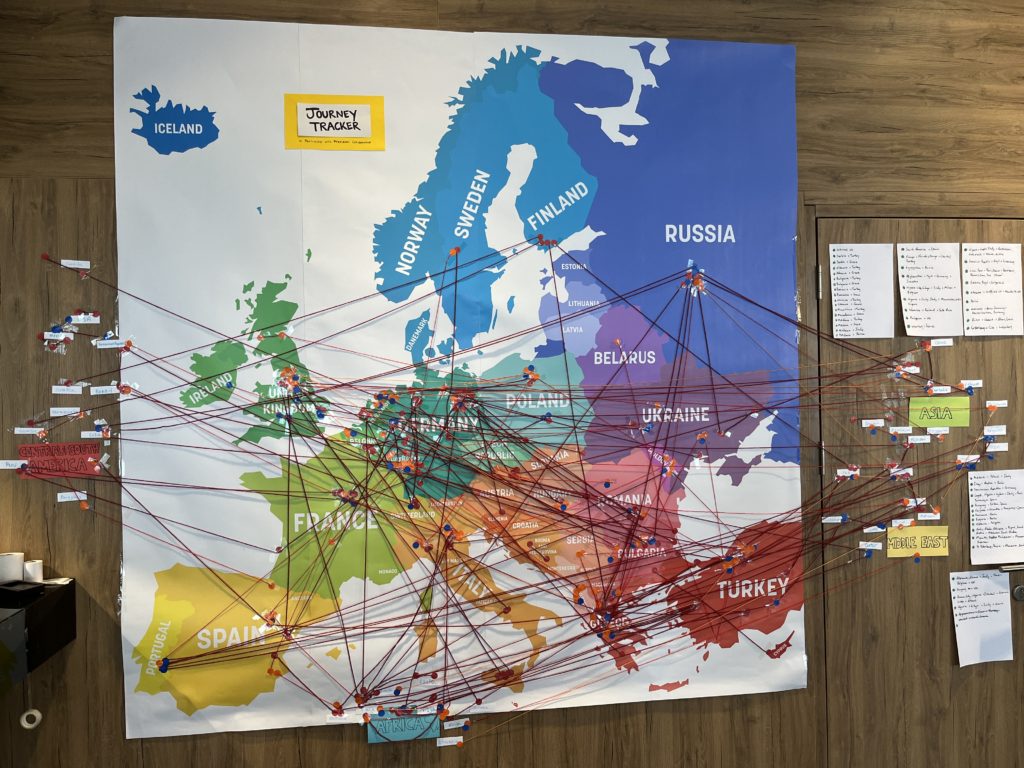 A map of Europe used by Bridge attendees to map out trafficking routes all over Europe.

The great thing about a network is the collective information that can then be used to fight trafficking. This was shown in Dr. Edwards’s interactive exercise of asking attendees to map out trafficking routes they were aware of in their work. This exercise aimed to create a regional map of known trafficking routes in and throughout Europe.

Members provided information about the type of trafficking, gender, age and trafficking routes with transitory points around Europe. As a result of this exercise over 200 routes were mapped and this information led to some key initial findings that further mapping should be done in Athens and Berlin as they are major transitory locations. This exercise also pointed out the need for more information on routes in the Mediterranean, Scandinavian and Baltic countries.

Bridge attendee Adriana Rus, a communications officer of the European Christian Political Movement summed up her experience at Bridge as a hopeful one. She said “in the context of human trafficking, when we look at the statistics, the lack of resources and the absence of justice, it can get very dark and hopeless, very quickly. It seems evil is winning sometimes. Watching the short movie about loverboys and traffickers by Netzwerk gegen Menschenhandel that showed us how easy it is to manipulate and ruin another human being was so jarring. But then, throughout the 3-day conference, we heard countless examples from all over Europe (and beyond) of people being rescued and restored, of victims, finding freedom, shelter and community. The story about how one of the organisations within EFN- Abolishion Romania- had a thought of doing something small to help incoming Ukrainian refugees by putting together an info flyer and how that took off and mobilised the entire network in responding to this crisis blew my mind. I saw Jesus’ hands and feet at work caring for the most vulnerable in our midst. That was an incredible image and reminded me that good and love win in the end.”
In a way that only God can work Coreen Lategan, the Executive Director of Kainos and first-time attendee relayed a story of God is constantly orchestrating the little details. In the first quarter of this year, when her team was plotting out the Kainos marketing campaigns for each quarter, the theme “Stronger Together” emerged for the 3rd quarter – with emphasis on collaboration, partnership, and functioning “better together”. Then, months later, the invitation to the European Freedom Network Bridge Conference was received and the theme was “Shaping Tomorrow Together”. She was inspired by how God works behind the scenes, always ensuring unity in the body through various forms.